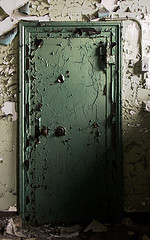 The Advisor thought back to the last time the ancient vault door had opened to the president’s touch. I was very hard on the president, he thought. I’m supposed to  be his confidant and even his helper. I’ve failed in those regards. Perhaps more than any of my esteemed predecessors. They all had problems. Presidents are not easy to work with. But how can I help him if he listens but never takes my advice? I swear at times I think he comes here as if he was a Catholic going to confessional. It’s not something he likes but he believes he must do it. I feel for his above-ground advisors. He is not a happy president. I’ll step back today if I get the right opening.

The Advisor glanced up at one of his many screens and saw the President was approaching his door. He checked to make sure the coffee was ready and the ashtray was on the table, then walked over to the door as Chris, the President’s constant Secret Service companion, swung open the door for his commander-in-chief.

“Mr. President, come in please,” the Advisor said, smiling. “I look forward to your visits. I seldom get a chance to talk about important issues. When you’re here, that’s my only chance.” The two men sat down in their usual seats and the President lit a cigarette. “If you don’t mind, Mr. President, I’d like to ask you why you come to see me.”

The President smiled and took a drag. “Sometimes I ask myself the same question.” He blew out a puff of smoke before answering. “I come down here because among all the people I meet with, you’re the only one who tells me exactly what you believe. You have no political or personal agenda and frankly you are much smarter than the others and you never leak information that either helps or hurts me. So the time I spend with you is like playing political chess. You give me a safe opportunity to sharpen my messaging skills. Now please, continue with your stream of criticism. I’m ready.” The President sat back in his chair, a sly grin on his face, and took another drag from his cigarette.

“Well, you must be feeling good. You’ve had a number of victories recently. So let me begin with you successful negotiations with Iran. Your citizens are nearly all bewildered. Some of the political lemmings take the sound bites and pass them on. I found it interesting that the conservative wing of America is comfortable debating substance while the further left you go, the less willing people are to debate issues. Instead, they attack the messengers and not the message they carry. So your Congressional power base, with a few exceptions, will not argue with the tenets of the Iranian agreement. They will focus on attacking the debaters. You have brilliantly given them the ideal message: ‘There was no other option. Either this agreement or war.’ As simplistic as that defense is, it is working and will continue to work. You know, as the intellectual you can be, that there were and are scores of different approaches. By going to the United Nations with the lifting of sanctions on nuclear activity as well as lifting embargoes on conventional weapons, you have made Congress irrelevant. Your progressive message in the election period can now paint the Republicans as being anxious to go to war with Iran rather than giving diplomacy a chance.

“Here again the left will be attacking the anti-Iran agreement people and not debating the agreement issues. Therefore you have already used the issue and now have a winning strategy.”

The President smiled, ground out his cigarette and said, ” You are too smart. I’m thankful you’re buried in this underground chamber with your unique political insights. I don’t mind this. I’ll give you more time. It’s like being in a safe time warp.”

The above is a fictional account of a meeting that never took place, but it could have.

The author’s latest Jack Brandon novel, ISIS Quiet Justice, is available at your local book store and in ebook format from Amazon.com and Barnes & Noble. Follow the author on Twitter at @factsfictions80.

One response to “INSIGHTS 218 THE ADVISOR’S TURN”