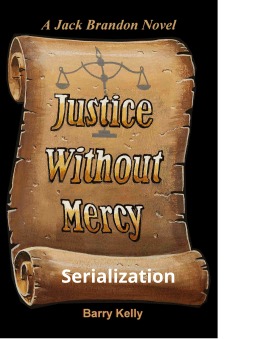 or five years of one-on-one training once a week. She felt confident she could hold her own. Jack had arranged for her to study Hapkido. Hapkido was not a sport. It was about killing and levels of hurting. Her instructors were very good. She was a beginner but she had some basic moves, especially the kicks that pleased her instructor. She saw Hankins get off the floor. Get out of his jacket and slowly start up the steps.

This time, when he was halfway up and planning his attack, Kelly launched herself down the staircase, catching him in the face and chest with her heels. Hankins crashed to the floor. Kelly’s thrust carried her on to the hood of the Explorer. Before Hankins could get up, she had leapt back onto the stairs and was waiting for him at the top again.

“Hey, rug guy, you want to try that again. I don’t want to hurt you too badly. The boss won’t like it. Please don’t make me kill you. Believe me, I really want to.”

Kelly knew she was messing with his mind, and it had bought her some time. There were only three outcomes to this standoff. He would jump in the Explorer and escape, kill her and Sally, or she had to kill or maim him. If he believed she was from al Qaeda, and the Professor and others were on the way, he just might opt to escape. She could not stop him.

Kelly glanced at her watch, only 9:15 AM. It seemed like hours had passed since she picked the lock. If only she had brought her gun. She saw Hankins get up and walk over to the workbench. He searched for a minute, then picked up a hammer and started back up the steps. In some ways that was helpful. She now knew what kind of an attack he would bring. It had to be a downward or a level blow from the right side. She didn’t plan her counter-moves. She would take whatever opening he gave her. React, do not think, is what Kathy told her. Kelly saw Hankins making moves to get in close where she would have trouble using a kick against him. He feinted with a right-hand hammer strike and when she focused on defending the expected strike, he hit her on the right side of her head just below the temple area with his fist. Kelly staggered back toward the open door. Dazed and sight impaired, she regained her balance and when the hammer strike came from the right, she blocked it with a rising left forearm block and smashed his face with a powerful right elbow strike. The elbow strike surprised and hurt Hankins. He temporarily lost his balance and forward movement, giving Kelly the opening she needed to deliver a front snap kick to his groin. Her kick missed his testicles but was delivered with enough force to knock him down the steps. She knew he was badly hurt, but she was still having trouble with her vision and nausea. If he came back quickly, she would be in trouble.

Hankins got up and said, “You bitch. Now I have you. I’m going to hurt you before I kill you.”

Smiling he started up the steps again, switching his hammer from hand to hand. As Kelly was gathering herself for a death fight, Hankins suddenly flew backward and lay still. Kelly heard a voice saying, “Hey, little sister, thought I would lend a hand. Are you okay?”

“Kathy! Where did you come from?”

“Yes. A bit woozy. The son-of-a-bitch caught me with a solid punch to the head. I had him, you know. But, am I ever glad to see you. Is he dead?”

“No. I think he’ll come around. I just slammed his head on the cement. Are you focused enough to bring me something to keep our little perp still? You know, I don’t think he outweighs you by much.”

“I’ll bring you some duct tape.”

Kelly stepped back into the sleeping area and was surprised to see Sally on her feet holding a large kitchen knife. “That’s the spirit, Sally. It’s over now and you’re safe.”

“Thank God! I peeked and saw most of the fight. You were wonderful. What are you, some kind of ninja? I was praying for you. What happened to him?”

“My boss is what happened to him. She could handle three like him. He’s unconscious. Hand me the duct tape. He’s going to see what it feels like. Put some hot water on. I badly need a cup of tea.”

Kelly told Sally to stay up here while she and her boss got her attacker wrapped up. Hankins was still out. Kathy said, “The bastard is still alive. He is going to have a monster headache. Let’s tape him up while he’s not squirming around. Make sure his mouth and eyes are taped.”

Five minutes later he looked like he was encased in a cocoon. Kelly asked, “What are we going to do with him?”

“While you were upstairs, I called Jack. He was just on the outskirts of Georgetown. I got a little earlier start than he did. I don’t want to talk anymore around Hankins. He may be awake. Follow me over near the garage door. If we are quiet, I don’t think he can hear us. Okay, we have another more immediate problem. What do we do with your friend upstairs? Is she in decent shape?”

“Yes, she doesn’t seem physically hurt. Her arms and legs have recovered from the tight tape bindings. Mentally, I don’t know. She seems strong but she had an awful experience. She looks and sounds like she is a classy woman with money and a decent education. Probably well connected. I guess the problem is that she has seen or soon will see both of us. We don’t want to be part of a criminal investigation, court appearances or publicity that could be all over Hankins’ case, even without the al Qaeda involvement.”

“Well, you got it. Smart girl, if I overlook the bad judgment of coming here alone and unarmed. Right now I can’t. Let’s get on with the show. Jack will be here in about 10 minutes. He’ll park near your car and come in by the side door. Incidentally, I thought for sure you were on stakeout when your room was empty and the car gone. Lo and behold, your car was parked and locked in a very good place to watch the garage door. When I examined the side door, I saw your lock pick tracks.

“Using all my considerable analytic powers, I deduced you were inside. Opening the unlocked door and seeing your flying ninja act, I was sure. It was then that I realized junior G-girl had come to the party unarmed. When Jack gets here, I’m sure he will have thought the problem through. My suggestion is that we talk your friend into keeping the whole thing to herself. I doubt she will want the smarmy media speculating on what happened to her in this sordid place. I doubt she wants to sue anyone and surely doesn’t want to testify in court. If our sick perp is dead or locked up in some national security place, her overnight horror story will not be front page. Anyway, we have to get her out of here now.

“Take her out to your car. No names or story. This case has some nasty sides to it that could embarrass her and even put her life in danger. You can flash my badge, and I mean flash, and tell her we try to protect people like her from consequences they don’t deserve. Tell her the attacker is not working alone. Her name should be kept out. We can do that, if she’ll cooperate. She will not be needed in the investigation. We don’t even want a statement. Go! Do your thing.”

Kelly ran up the stairs. Her vision was almost back to normal. A couple of Advil would be great. She was carrying Kathy’s badge in her hand. She flashed the badge at Sally and said, “Get your stuff. All of it. We’re outta here.”

After a quick check, Kelly led the way down the stairs and out the side door to her car. Sally was quiet but when the car left Georgetown and crossed the Waccamaw bridge on Route 17 north, she asked, “Where are we going?”

“We wanted to get you out of there before local police show up. I’m part of a special federal unit that deals with serial killers. We have enough to send this guy away for life. We don’t need your testimony but, if you want, you can be part of the witness parade and have your story all over the news. I figured you didn’t want that and my boss agreed. So it’s your choice.”

“You mean for me this whole thing is over, and I don’t have to tell my story to the whole world?”

“That’s right. I could see no upside for you to be involved in a long drawn out legal case. But, it is your choice.”

“No! I just want to forget the whole thing.”

“You won’t be able to forget it, but you’ll be able to deal with it. Part of this procedure is that you do not talk to anyone about what happened. Otherwise, some defense lawyer will be handing you a summons. Understand?”

“You have. You stayed alive until we got there. I couldn’t stand another dead young woman. Just do something good for someone in need and live a full life. Remember, you’ve been given a second chance. Not many people get one. Use it well. Now, where is your car? I want to help you with a believable story as to why your car was left wherever all night and where you were. It’s possible someone called the police to check your car or to tow it.”

It didn’t take long for Sally to make up an alibi for her absence. She wasn’t sure anyone would have missed her. She had her own rented condo and lived by herself. She was working her way through a messy breakup of a long-term relationship. Her car was where she left it. Kelly hugged her, and Sally said, “You know I’ll never forget you, especially your mother tiger act on the landing. If you do this kind of thing all the time, please be careful. It’s strangely comforting to know there are people like you looking out for the rest of us. Thank you.”