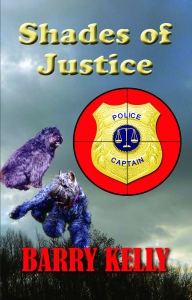 This begins the serialization of Barry Kelly’s third novel, “Shades of Justice.” Peruse this blog further for the serializations of his first two novels in the Justice Trilogy: “Justice Beyond Law” and “Justice without Mercy.”

Jake was not bright, but he could shoot.

His dad was a Vietnam War vet and a gun nut. When Jake was in his middle teens, his dad sent him to a shooting camp run by a former squad buddy who took a special interest in Jake when he saw the kid’s raw talent. The first summer the instructor told Jake’s dad that his kid wasn’t even full grown yet, but he was a better shot than his dad ever was. Jake thought his dad would be angry but, instead, he gave Jake a rare hug and praise.

His dad was dead now, but Jake liked to remember the praise his dad had given him about his shooting skills. When he was being honest, Jake would say he was very good at shots less than 300 yards. After that his success dropped off sharply. But how many times had he had to make a kill beyond a couple of hundred yards?

Not today. Exactly 125 yards. No wind. Good light. Doesn’t get any better. The two police cruisers were in plain sight, angled into the curb at a 7-Eleven just off Forbes Avenue in Pittsburgh. Jake liked his hide. If you took the time to case your kill site, it was easy to find good targets and plenty of good shooting angles. He had found his line-of-sight to the popular coffee place for cops from the top of a building farther up the street. The angle was better than he usually had. Picking the lock on the access door to the roof took less than a minute. His bogus fire inspector credentials were not needed.

Jake loved the rush of shooting from an ambush site. He was a god. He controlled the destinies of his targets. It was up to him. He could kill, select the severity of the wound, or just scare them. The short term, five minutes after squeezing the trigger, was almost always the same. Mass confusion, multiple responses, wailing sirens, and scurrying pedestrians. The long term was different. Killing a cop was serious stuff. The city would never forget and the search for the shooter would be much more intense.

Today, in the next minute, he would shoot to seriously wound two of the laughing cops who were leaning against a squad car.

Jake often wondered why the voice that called him on his cell paid him for shooting cops or firefighters. The voice gave him a date, time, and city. The rest was up to him. Never any complaints from the voice. His pay arrived in his post office box on time. It was a good deal. He had never had so much money, but he knew something this good couldn’t last. He hid most of the money in the log wall of his cabin near Big Timbers, Montana. When he needed the money, there would be no time to mess with banks and leave a trail for the cops. They hadn’t identified him yet. But the hunt was on for the City Sniper.

Jake glanced at his Timex watch. One more minute. The voice told him he did not have to be exact, just close. But he was a professional and one of the marks of a professional is being on time all the time.

He was viewing the cops through an old 4X scope mounted on a vintage .22 Hornet bolt-action Ruger rifle. If need be, he could leave the weapon behind. He had bought it at a private gun sale for cash. Cleaned up, sighted in, it was a lethal weapon within 150 yards. Hollow points didn’t leave much for the ballistics guys.

Officer John Reilly was hit first as he was taking a sip of his heavily sugared coffee. The hollow point hit him in the left side of his jaw, blowing a large piece of his tongue and several teeth out of the exit wound. His partner pulled John to the ground but not before another hollow point hit him high on his right shoulder. Neither one remembered hearing the shots. There was no panic on the street or in the coffee shop. By the time the first police and rescue vehicles with their screaming sirens arrived, Jake had cleaned up the shooting site, put the disassembled rifle in his tool box, picked the roof door lock closed, and casually walked the short distance to his pickup truck. Another successful shooting and escape. He had planned to hit both cops but the one he hit first got in the way.

His next act was a week later in Saint Paul, Minnesota. He hated to leave the late spring weather in Pittsburgh for the uncertainty of the weather in Minnesota. It could be unbelievably cold waiting in a sniper hide. Only people who were strong and dumb could put up with only three weeks of warm weather.